When are we going to do some REAL math?

I’ve had the privilege to have a preservice teacher in my classroom for the last few weeks. 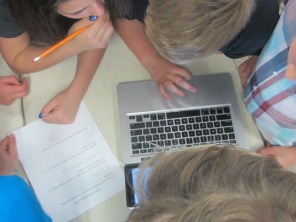 He’s enthusiastic, incredibly positive, great with the kids and eager to learn. Paul’s also a
math major. As we watched the kids in my grade 5/6 classroom once again dive enthusiastically and confidently into another math problem, he came up to me and said, “I’m literally blown away…. AGAIN!” So, what was the problem my students were so engaged with?

Recently, as part of our Make A Difference project, my students raised $646.10 at their bake sale to deposit into our M.A.D Fund. They had already donated $120.00 to help  a Syrian refugee family to come to Thunder Bay and $100.00 to help the residents ravaged by the wildfires in Fort McMurray. I challenged my students to figure out what percentage of their M.A.D Fund they had left to spent, how much each student could spend if they divided the remaining money equally amongst themselves and what percentage of that money each of them was entitled to. After they were done those calculations, each  followed our M.A.D inquiry model to decide how they’d like to spend their part of the money and if they wanted to to combine their efforts with classmates to increase the amount of money and the percentage of the total they could spend on their cause. My students worked through these problems with vigour, enthusiasm and highly effective problem solving, negotiating and communication skills. They worked on their math calculations, researched and discussed worthy causes, negotiated with one another and eventually arranged themselves into five teams.

One team planned to buy new books for our library, another group decided to purchase 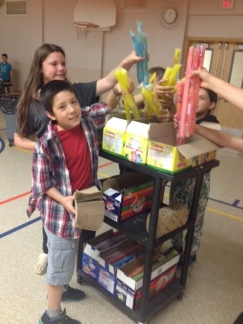 perennials to establish a flower garden at the front of our school, another wanted to  plan a surprise “Free Freezie Day” for our school community, three girls would organize a pizza party for the class that donated the most items for a local charity and another group was excited to buy art supplies to use when they volunteered to teach an art lesson to a younger grade! Once they had divided into groups my students once again started reworking their calculations to reflect the number of people on their team and the percentage and amount they had to spend. While the students worked, Mr. O and I circulated, observed, listened to their math talk, gave feedback and asked probing questions to push their math thinking and problem solving skills deeper and further. Upon completing their work, we had students share and explain their math thinking:

Now this was real math! But how did I get here?

A total shift in my math teaching mindset occurred a few years ago after straying from the math textbook, as I traditionally did once a year at Christmas during our annual fundraising efforts for our local Shelter House. As tradition has it, my students raise money via a yard sale and then go shopping to a local grocery store where they purchase food for the less fortunate and finally hand deliver the food (a truck full) to the Shelter. Math, during this time, becomes relevant and “real” to my students.  They work with the money we raise and figure out totals, percentages, budgets, unit pricing and manage and analyze the data. For me, teaching math this way proved incredibly rewarding and easy. My students really seemed to”get” the concepts we were discussing.

However, upon returning to school in January, after Christmas Break, I would reluctantly return to the math textbook and math once again, felt mundane and teaching it often felt like pulling teeth. One day, in the middle of January, after returning from recess I asked my students to take out their math texts and turn to their new unit on Geometry. As my kids extracted their texts from their desks, I once again felt more like a dentist than a teacher, I was back to pulling teeth! It was at that pivotal moment that Erin let out I sigh and implored, “Mr. C, when are we going to do some real math again?” Her question stopped me in my tracks. I felt the same way and so did the rest of my class. However, I also felt conflicted. I knew the text like the back of my hand. The questions, assignments, black line masters  and unit tests were all laid out for me. The path was familiar and easy to follow and navigate.  But at the same time my students wanted more. The text didn’t provide the same opportunities for learning math that they desired. They wanted to do real math.

So I took a deep breathe, told my students to put their math textbooks away and put their outdoor clothing back on. Once outside I instructed them get into teams of two and construct a rectangular prism out of snow. The math talk and problem solving immediately began. I brought out the camera and took pictures and video of their learning. We brought all the prisms back inside and I challenged them to find the perimeter and area of the base of their snow cubes. From there we worked on the volume and I figured, while we’re at it, I could introduce surface area. The kids decided they could draw nets to 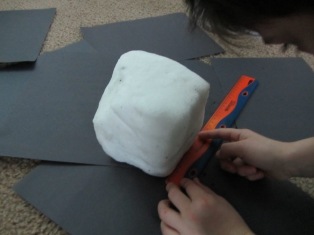 help them find the surface area. The students were completely engrossed in their math and really seemed to be getting it. Their computations were based on something that was relevant, tangible and real to them. We decided that the following day we would compare our prisms, work out the mean and medium and graph and analyze the  data collected. As their rectangular snow prisms began to melt and my students prepared to leave for the day, Erin approached me with a huge smile on her face and thanked me for returning to real math. I thanked her for the challenge and for having the courage to speak up. As the kids walked out the door, I reflected on the number of expectations I had covered in one single lesson because we weren’t  confined and limited to the content of the text. We had the freedom to explore many different math concepts, traveling down some familiar paths, as well as new and unexpected ones.

Over the course of the following years I slowly strayed further and further from the math text to the point where I am today; the math text collects dust on shelves in the back of my room. Finding content is easy! Math is all around us and we have tools at our finger tips to bring real math to our students!  My favourite tools are a camera, SMART Notebook, iMovie, QuickTime GarageBand, Photo Booth and Explain Everything. I’ve also found that students are much more excited and confident to share their math thinking when they have ownership of the content. My students have also become creators of math content for one another and they are excited to know that I’ll share their problems with my future students. As well, by using Twitter and our class blog to share my students’ math thinking and challenges  my students (and their parents!) have become active, involved and engaged learners in our math journeys.

Where are you in your math teaching journey? What works? What doesn’t? Have you become a slave to the text? Or does the text work for you? Have you found a balance between your own math problems and textbook problems? What are you still struggling with? One thing I know for sure: Teaching math doesn’t have to feel like pulling teeth! Would love to hear your thoughts!

I am a Grade 6 teacher of 18 years in Thunder Bay Ontario, Canada. Passionate about sharing with teachers throughout the world. Teaching students how to use technology 4 good and to make a positive difference in the world. Apple Distinguished Educator 2013, SMART Exemplary Educator 2013, Google Educator 2015.
View all posts by mrcameron14 →
This entry was posted in Uncategorized. Bookmark the permalink.

3 Responses to When are we going to do some REAL math?