This is the story of Blue Gold.

It is also the story of Nibi.

It is our story.

I have always had a strong connection to water. In fact, it is what connected my father and I. We spent many wonderful days exploring and fishing the creeks and rivers that flow into Lake Superior. The Black Sturgeon, the McIntyre and Cedar Creek were some of our favourites. It was on these waters that I learned about my dad and I learned about myself. Water also connects my own son and I; we continue to visit the same waters my dad and and did some 40 years ago. 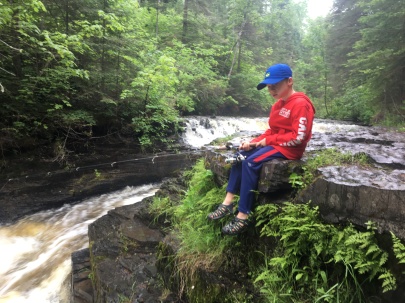 As a young student, I fondly remember watching the National Film Board’s Paddle to the Sea. It’s a story about a young Indigenous boy who carves a wooden replica of himself paddling a canoe. The story follows the journey of the little canoe through the Great Lakes to its eventual destination; the Atlantic Ocean. The video connected me to the Great Lakes and opened my eyes to a world beyond Thunder Bay and Lake Superior.

Water also helps me to connect my class, to help them understand their place in the world and realize just how great the Great Lakes are. I now bring the story  “Paddle to the Sea”  to my own class. I also harness the power of technology to help my students track Paddle’s journey in  “real time” via Google Earth. In March, my students represented Lake Superior, from the perspective of living in Thunder Bay, during A Kids’ Guide to Canada’s Kids Meet the Great Lakes  virtual tour of the Great Lakes.

Although there was never a doubt that my students had a firm understanding of just how great the Great Lakes were, something was still missing. I always struggled to find a way to help my students understand that they were also at risk. It’s a hard concept to grasp when you live on the largest freshwater lake in the world. It seems so vast, so endless, so untouched.

My connection to Google Earth and National Geographic Education allowed me to visit Google Headquarters in Chicago and Seattle to participate in two “Hackathons”  and  eventually work with an incredible team of educators (Joel Charlebois, Afzal Shaikh, Jessica Walsh and Brooke Whitlow) to pitch an idea for a Teacher Authored Voyageur story which we called “Blue Gold”.

The idea was to have students use Google Earth to take a modern day journey down the Great Lakes; to help them understand just how great the Great Lakes are, but also to realize they are at risk. The story ends with a call to action.  Our idea was voted the story “Most Likely to Change the World” and we learned it would become the first TAV to be launched on Google Earth. The launch would take place at ISTE during the last week of June! The team was excited to say the least! The rest of the team would be at ISTE for the launch, I however, would still be in my classroom. But I couldn’t wait to put the Voyageur story in the hands of my students and watch them navigate “Blue Gold”. What they would find within it would be sure to amaze, challenge and inspire them!

It was a cool, overcast day in late April when my son Kai and I decided to take our exchange student Renaud (from France) on a short bike ride around a small lake that connects to Lake Superior via the Current River.  We wanted him to witness our Great Lake Superior and the giant that sleeps within it.

As we were riding, we passed a woman dressed in traditional Anishinaabe clothing, carrying a staff in one hand and a copper bucket in the other. I’m not sure either of the boys 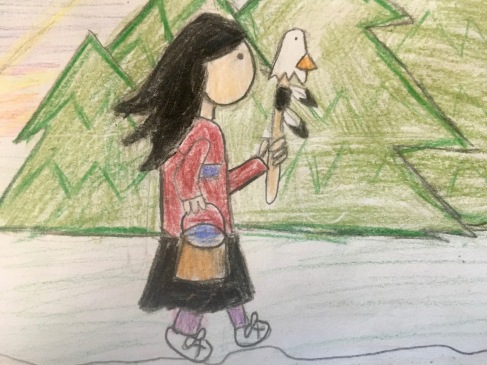 noticed her but she caught my attention for just a moment. We continued our ride, stopped atop the dam which connects Boulevard Lake to the Current River and eventually empties into Lake Superior. We showed Renaud the Sleeping Giant and tried to help him understand just how vast Lake Superior was. As we mounted our bikes and began to ride, the mysterious woman with the copper bucket appeared again. This time, as we passed, my son inquired about who she may be and what she might be doing. As we rode, I suggested that we could stop, turn around and  he could ask her the very questions that were on my mind as well. The moment passed. Opportunity lost.

And then it happened! On a Saturday afternoon in mid May I opened the Ontario College of Teacher’s Professionally Speaking magazine and this is what I found…. 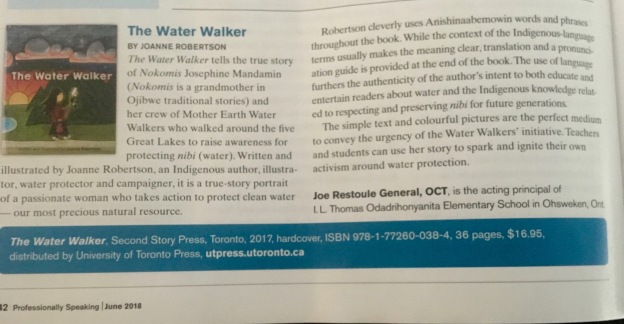 Nokomis Josephine Mandamin’s story is simply incredible and inspiring. One day a wise ogimaa told her: “In your lifetime, the day will come when an ounce of water costs more than an ounce of gold. What are you going to do about it?” Josephine acted. Along with other women, men and young people, Nokomis has walked around all of the Great Lakes to raise awareness of our need to protect Nibi (water). Nokomis is a difference maker. Personally, I compare her to a modern day Terry Fox. 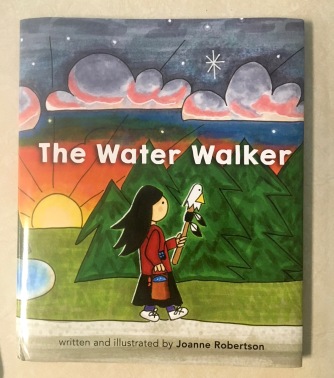 Ironically, Josephine is from Thunder Bay. I simply cannot explain why I have not heard her story until now. But now I know, my child knows and my students know Nokomis’ story. I read “The Water Walker”, written and illustrated by Joanne Robertson. Nokomis loves Nibi and she wants to bring awareness of the importance of protecting it. My students and I were so inspired by her story that they made a video to share their thoughts and feelings with her. We have also podcasted about Josephine in our M.A.D (Make A Difference) Podcast series.

The “Water Walker” ends with a question, similar to one that I often ask my students…. 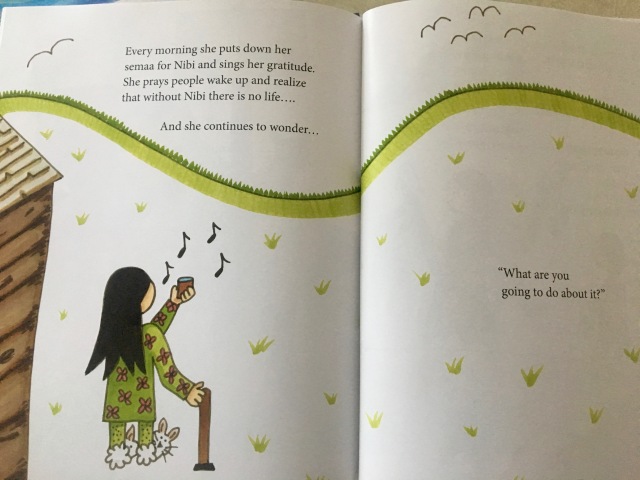 Nokomis asks…. “What are YOU going to do about it?”

To honour Nokomis and to help her protect Nibi my students and I had idea to become “Junior Water Walkers”. We would pick a body of water that we would “adopt” and work to help protect it. We reached out to Joanne to see if this would be an initiative that she thought Josephine would appreciate and this was her response:

We were excited to share our idea with other classes and even more excited to learn that they would join us in adopting a body of water of their own!

My students and I just had to meet Nokomis in person! We invited both she and Joanne to our classroom. The school year was coming to an end and we were running out of time, but amazingly we found a day that worked for everyone. On Monday June 11 we would connect! While I was making arrangements to have Nokomis visit our classroom, Emily Henderson, Program Manager of Earth Education Outreach contacted me to ask if Google Earth could come to our classroom. Although I couldn’t be at ISTE for the launch of our Blue Gold Teacher Authored Voyageur Story a team from Google Earth wanted to visit  our classroom! The only day that could work? June 11.

On June 11 Nibi…. water…. Blue Gold brought us all together.

We are hoping that other classes around the Great Lakes, across Canada and throughout the world will be as inspired by Nokomis’ story as we are and join us in becoming Junior Water Walkers to honour Josephine Madamin, continue her walk and protect Nibi.

So we ask: “What are you going to do about it?”

I am a Grade 6 teacher of 18 years in Thunder Bay Ontario, Canada. Passionate about sharing with teachers throughout the world. Teaching students how to use technology 4 good and to make a positive difference in the world. Apple Distinguished Educator 2013, SMART Exemplary Educator 2013, Google Educator 2015.
View all posts by mrcameron14 →
This entry was posted in Uncategorized. Bookmark the permalink.